Video depicting ORIANA's departure from the Mayflower Terminal on 21st November 2015 in late afternoon and already in complete darkness, thus beggining the well known journey out of her homeport bound for the English Channel.
It was the start of her current 14 day Canary Isles and Madeira cruise, having called first in Lisbon, and will also include a visit to La Coruna, Northern Spain on the return voyage back to Southampton Water.
Also in this footage, Fred. Olsen's BALMORAL is seen following her in the same route out of the UK's busiest cruise port.
Video: Daniel Gosling.
Publicada por João Abreu à(s) 13:11 0 comentários

A subject we have mentioned on previous occasions a cruise on board ORIANA calling in Funchal on New Years Eve is an experience which very few can fail to be impressed by the events the day play host to from the port full of cruise ships filling all available berths and also sitting on anchor during the day.
As the light fades the city comes alive with the illumination of the Christmas lights, from the decks of a docked ship the entire waterfront forms a beautiful panorama of light and colour and end the day and the year the world famous fireworks display complemented by a cacophony of ship's and boat's horns .
It is an event which P&O has had a presence at for almost 30 years and for a number of those ORIANA  has been on hand to welcome in the new year.
One such New Year we have mentioned previously was of 2004/2005 and thanks to the medium of film we once again join avid P&O Cruiser David Taylor as we see a little of the the adventures of passengers on this cruise enjoyed from leaving a wintery Southampton to enjoying the fireworks in Funchal. 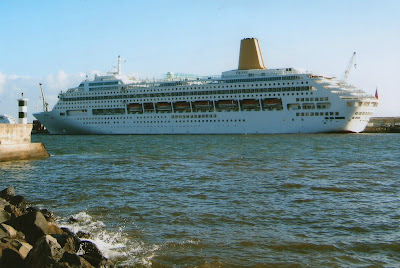 ORIANA docked in Funchal 31st December 2004
Below we present the entire video shot by David from the cruise.

A meeting at sea

As we have mentioned previously ORIANA when seen with her in fleet mates makes quite an inspiring sight from being seen with her equally unique half sister AURORA  or those siblings which come from various classes such as the Crown Class VENTURA and AZURA or the Vista Class ARCADIA. 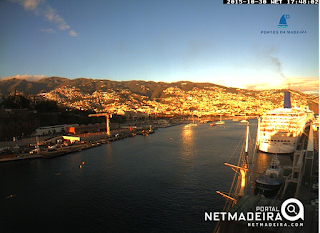 ORIANA and ARCADIA seen together in Funchal, Madeira on the 30th of October 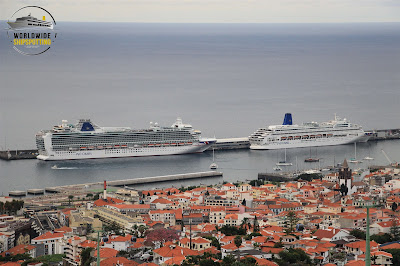 ORIANA and AZURA docked in Funchal on the 8th October
In the early days of her career ORIANA would on occasion be seen with her venerable 'mother' CANBERRA and in contrast to the meetings we see these days the two reflected a certain affinity with each other ORIANA proudly displaying elements and styling adapted from the older ship's distinctive design.
On at least one occasion during the last weeks of CANBERRA's service life she and ORIANA met at sea and for a time sailed together.
Below a video from David Taylor, a well known cruiser also known on line as Cruisa, taken in September 1997 from ORIANA it shows the two ships both with their upper decks full, sailing together back to Southampton.
More videos and photos from David can be found at his website  http://www.cruisa.co.uk/