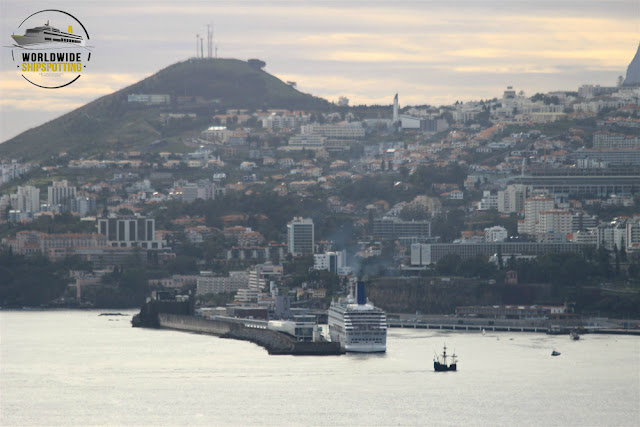 ORIANA seen at speed off Garajau, the most eastern point of Funchal's bay, on 21 February 2016, after the departure from Madeira's capital, the last port of call of a 50-day Caribbean and USA transatlantic cruise. 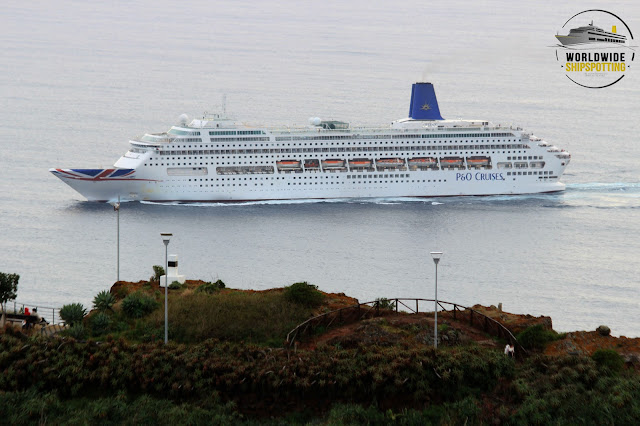 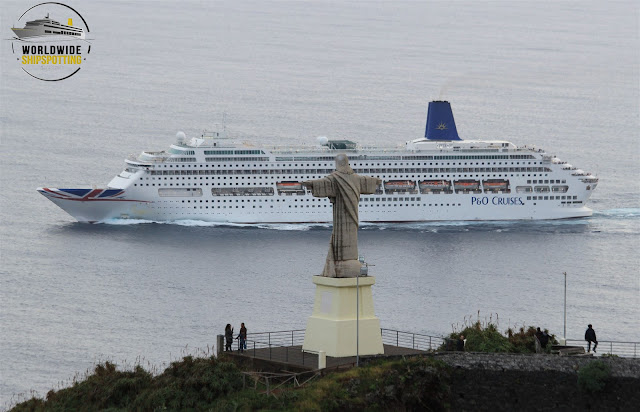 The greatest sight of this promontory is a 14 m. high Christ the King monument located on top, inaugurated on 30 October 1927. Like many other of these catholic statues that exist around the World (the most iconic being the one in Rio de Janeiro, Brazil), the monument in Madeira is dedicated to the Sacred Heart of Jesus Christ, and with its open arms facing the sea, it is as if it's blessing the ones that arrive and depart port. 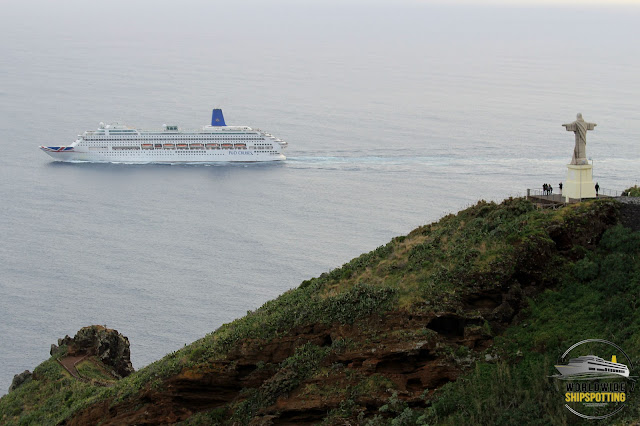 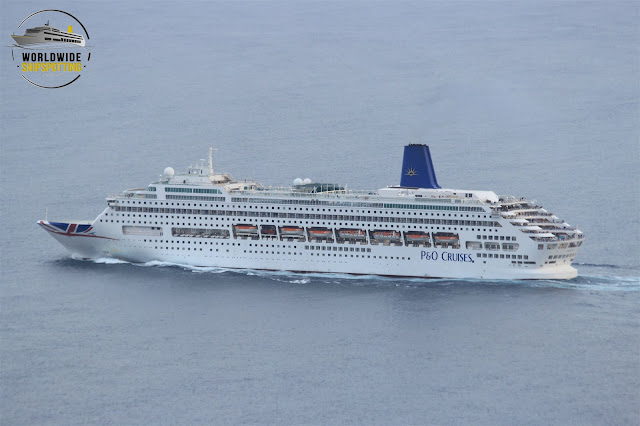 As ORIANA started her journey homebound to Southampton, this was almost like an obligatory passage, allowing for some privileged shots of her underway.
Now after her voyage to the West, ORIANA has two scheduled itineraries to the Norwegian Fjords, primal destination at this time of the year to admire the famous northern lights. Today she arrived in the port of Stavanger, southern Norway.

Reunion with two fleetmates in October 2015

When ORIANA arrived in the port of Santa Cruz de Tenerife early in the morning of 27 October 2015, on yet another cruise to the Canary Islands, she was about to meet for the first time, and far away from home, her newest mate and flagship of P&O, BRITANNIA, in service from March that year.
Just like BRITANNIA, ORIANA was also the flagship of the company 20 years ago, and at the time was amongst the largest cruise ships in the World with 69,153 GT and a 1,975 pax. cappacity. On the other side the new flagship has 143,730 GT and is able to accomodate up to 4,372 pax. which is a clear sign of the growth, not only of the cruise industry, but of the British cruise market as well, with more and more people willing to go cruising from their "doorstep".
This reunion between the two was almost like a surprise one, since BRITANNIA was originally scheduled to call in Funchal on her maiden transatlantic crossing, but the lack of available berth space led to the decision of chaging the call to Tenerife, where she could dock instead of staying at anchor in Madeira. 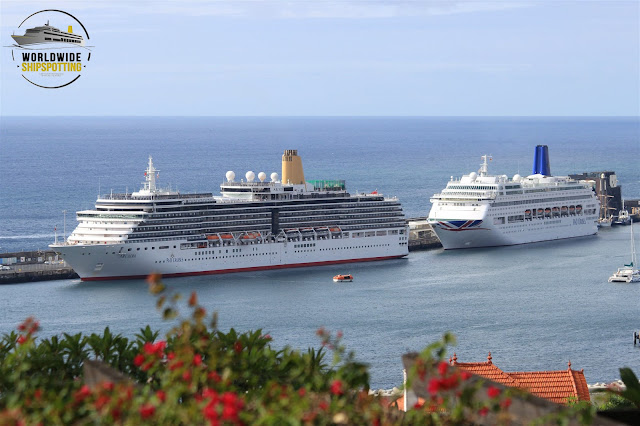 Two days later, on 30 October, ORIANA met in Funchal with a more familiar fleetmate, the ARCADIA, cruising for P&O since 2005. In fact this was the second time the two have met in Madeira's capital, the first occured 6 years before, on 21 December 2009.
At the time (Oct. 2015) ARCADIA was returning to the UK after a Caribbean transatlantic cruise, and made quite a curious meeting with ORIANA, both displaying a contrast of P&O liveries, the classic white and buff against the new blue livery respectivaly. 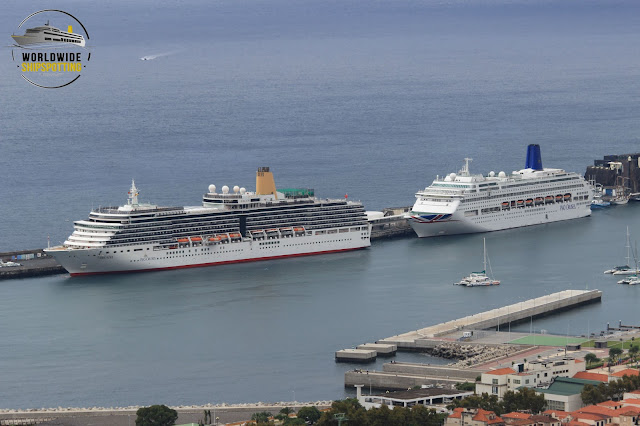 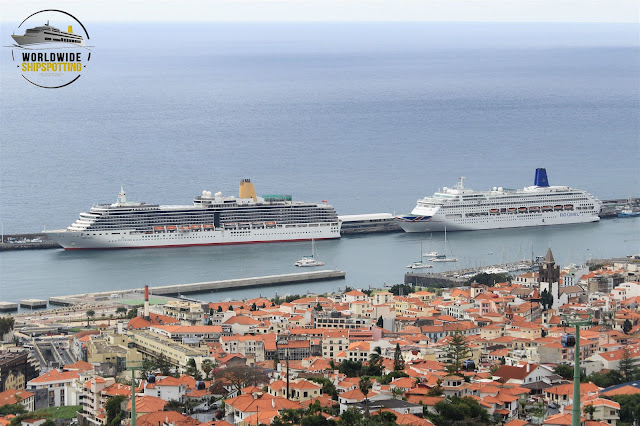 At the end of the day, as both ships were ready to depart to their homeport of Southampton, a horn salute took place with ORIANA successfully having the last word! The video bellow depicts the moment:
To watch the 2009 horn salute click here.

Making the peniulitmate call of her current cruise before heading back across the Atlantic ORIANA yesterday called in the British Overseas Territory of Bermuda he port of regisitery since December 2006.
Seen of the east coast at around 7am local time ORIANA docked at the King’s Wharf in the large Royal Naval Dockyard complex.

The Island despite it's position almost 1609 km north of the Caribbean the climate is a Sub-Tropical due to the Gulf Stream passing nearby the Island accordingly the weather varies according to the season from mild winters to blistering hot summers.
For ORIANA and her passengers yesterday the weather greeted them with heavy winds and occasional rain.
For those of ORIANA's passengers wishing explore what Bermuda has on offer the Royal Naval Dockyard formed the perfect starting point, established in 1795 it served as the HM Dockyard until 1951 and then as the land based Naval facility HMS MALABAR until it's clousure in 1995. Since then the old dockyard found a new life as a tourist attraction and home to the Bermuda Maritime Museum detailing the Island's maritime history or for a different pace a the nearby Dolphin Quest attraction, while many of  the old  warehouses have been redeveloped into shops and restaurants.
At a round 4:15pm with the tugs POWERFUL and FAITHFUL attending due to the wind ORIANA began lifting off the berth.
Wiith the tugs leaving her side ORIANA made her way out to sea before turning to starboard and assuming a course to take her across the Atlantic. 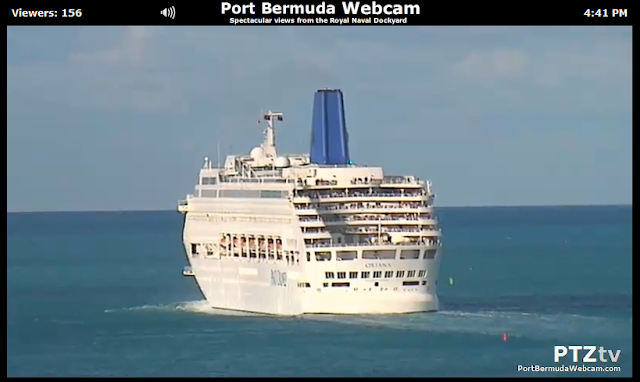 Leaving Bermuda and the ports she has called at behind ORIANA is one day into a 6 day Transatlantic crossing where she will call at Funchal, Madeira on the 21st February.

As well as being ORIANA's second call at the port her presence marked the beginning of the cruise season and as such was reported in the local press which can be read online here
Publicada por Steve Martin à(s) 19:20 0 comentários

ORIANA in The Sunshine State

For the better part of a week ORIANA's passengers have been enjoying the best of what Florida has to offer.
After aborting a call at Key West ORIANA headed at around 18 knots towards her next scheduled port of call Miami, passing fairly close to another Meyer Werft built ship, DISNEY FANTASY.

Arriving earlier than was intially scheduled ORIANA began her two day call in the company of MAJESTY OF THE SEAS and NORWEGIAN SKY, being based mainly in the US two ships ORIANA would not normally encounter, it is also note worthy that NORWEGIAN SKY was born out of the designs drawn up by Bremer Vulkan for Project Gemini/ORIANA which were rejected by P&O.
While docked in Miami passengers could enjoy the splendours of the city often cited to be the Cruise Capital of the US due to it's large number of ship calls and being the home of many of the worlds largest cruise companies including P&O Cruises parent company Carnival Corporation.
While those not intrested in the business aspect of cruising could enjoy seeing the famed Art Deco buildings which drew their insperation from the style that was once embraced by the great ocean liners such as NORMANDIE  and in more modern times is a feature on board both ORIANA and her near sister AURORA. 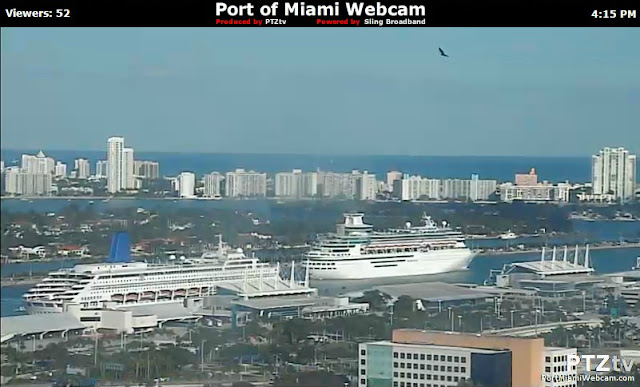 ORIANA docked in Miami as the MAJESTY OF THE SEAS departs
Departing from Miami ORIANA next called into Port Canaveral arriving on a rather windy morning one of the webcams in the port was excellently positoned to capture her as with a tug in attendance she slid almost effortlessly into dock. 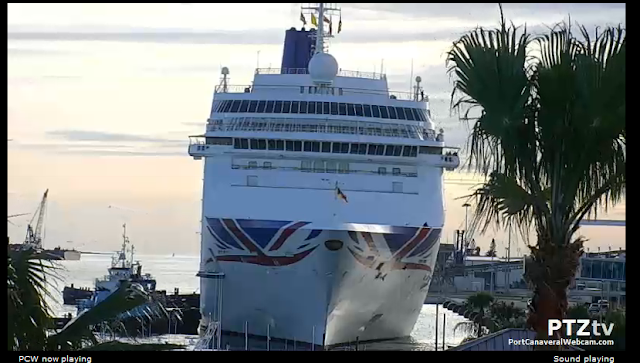 During her stay in the port ORIANA was in the company of a fellow Carnival ship in the shape of CARNIVAL PRIDE. 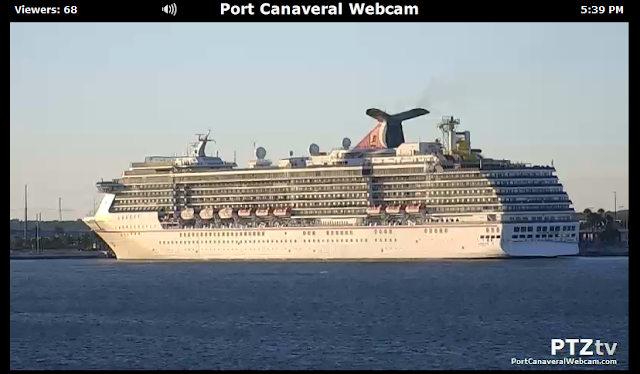 Quite by coincidence during a similar call almost 3 years ago on the 6th March 2013 ORIANA also shared the port with CARNIVAL PRIDE. 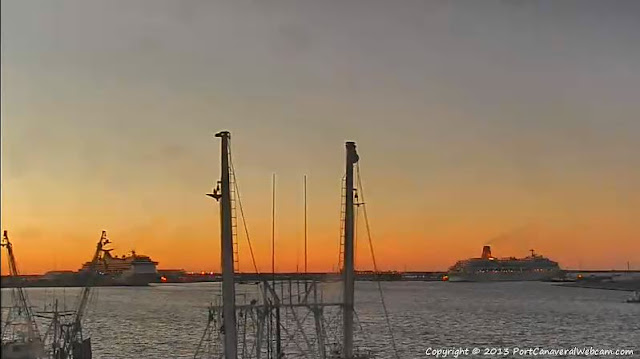 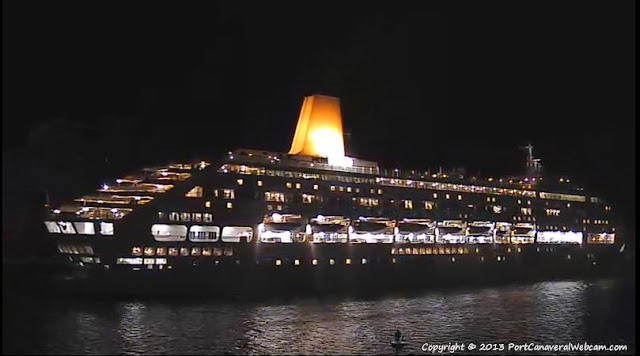 ORIANA's next port of call will be Charleston, South Carolina where she will arrive tomorrow.
Publicada por Steve Martin à(s) 23:28 0 comentários

ORIANA in arrives in New Orleans

Today ORIANA  makes her return to the USA with a two day call in New Orleans, Louisiana.
Arriving earlier today after a day at sea , ORIANA made her entrance on to the mighty Missisipi river before making her way up river arriving at New Orleans, the transit lasting a little under 6 hours at an average speed of  11 to 12 knots. 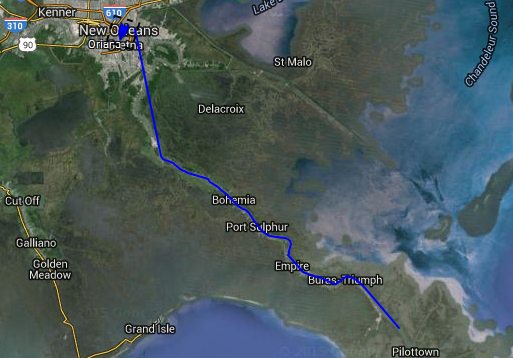 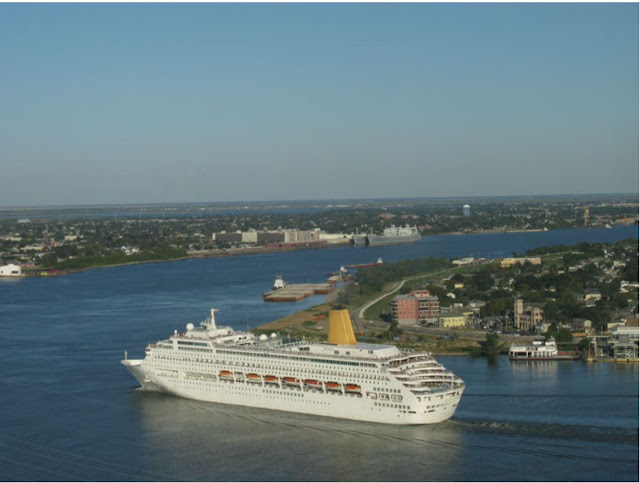 ORIANA on the Missisipi River, 2011
Spending two days in port ORIANA's passengers will be spoilt for choice for what to do within the city's melting pot of culture with strong African, French and Caribbean influence from it's clubs and bars with their distinctive sounds of Jazz and Blues while those looking for food highlights are able to enjoy the famed Creole and Cajun cuisine.
Departing from New Orleans ORIANA will then head to Florida and Key West the southernmost of the Florida Keys where she will arrive on the 7th February .
Publicada por Steve Martin à(s) 20:34 0 comentários