Today finds ORIANA anchored off the Mexican port of Progreso in the state of Yucatán.
Having spent a day at sea from her previous call in New Orleans ORIANA arrived at anchor at 7:01am local time and was joined around 20 miutes later by Carnival Cruise Lines' CARNIVAL TRIUMPH who anchored alongside ORIANA.
Venturing ashore via tender ORIANA's passengers are spoilt for choice how to spend their time ashore   from exploring the wharf which at 7km is the longest in Mexico, and reportedly the world, it bustles with the sound of locals coming to enjoy the white sand beaches and clear waters or enjoy the local cuisine in one of the many terraced restaurants.
However perhaps the jewel in the crown, certainly as far as history lovers are concerned are the nearby remains of Mayan cities of Uxmal and Chichen Itza, the mighty structures towering above the ground have for generations inspired all who gaze upon them from tourists like ORIANA's passengers to film makers, writers and even video game developers and each take something different away from these awesome structures.

Departing Progreso ORIANA will spend a day at sea before making her first Caribbean port of the cruise, Montego Bay, Jamaica.

Enviar a mensagem por emailDê a sua opinião!Partilhar no TwitterPartilhar no FacebookPartilhar no Pinterest
Etiquetas: Facts of Interest, Ports of Call

An overnight call in Bermuda

After 5 days crossing the Atlantic ORIANA arrived yesterday at the port of Hamilton, Bermuda where she was joined by a fellow Carnival brand ship in the shape of Curnard's QUEEN VICTORIA.
It is interesting to note that the two ships docked together ,both of which are Bermuda registered, represent two different approaches to the traditional 'British cruise experience' QUEEN VICTORIA offering the service as expected by its international clientele with white gloved service, afternoon tea, royal connections all wrapped in the White Star name, in comparsion ORIANA being just a elegant as her Cunard counterpart offers the exeperince which is more akin with the traditions and/or home comforts that the British themselves enjoy and hold dear such as the afore mentioned afternoon tea, fine dining and also dining options which are more British inspired if desired . 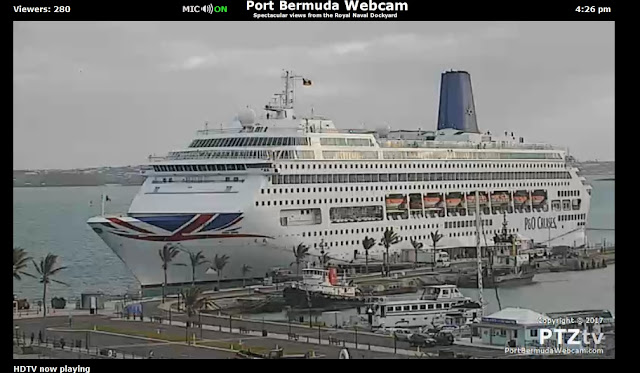 Shortly after 4pm QUEEN VICTORIA departed leaving ORIANA alone for a evening in port.
Far from the winter cold at home ORIANA's passengers have had pleanty of time to explore the historic port including the nearby Royal Naval Dockyard which was in use as a active naval base from 1791 to 1957 now open as a tourist attraction with facilities such as artists studios, cafes and shopping malls among others.
Having spent 5 days at sea an extended overnight stay in port is most welcome for passengers to enjoy the nightlife on offer adding an extra night time experience alongside those available onboard. 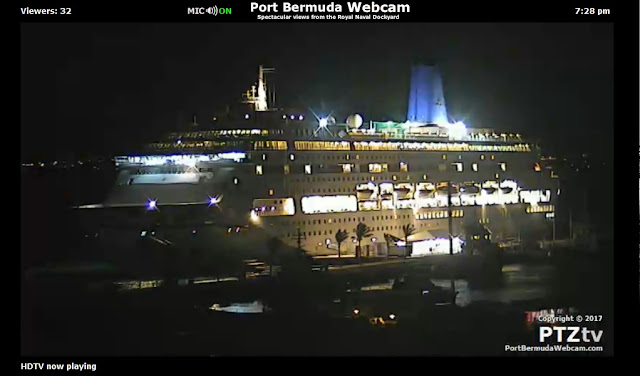 Following her second day in port shortly after 3pm ORIANA's departure preparations began and with all passengers on board and accounted for the gangway was taken back on board and a little over half an hour later her lines were let go.
After several blasts on her horn and with passengers filling her upper decks ORIANA with the tug FAITHFUL nearby edged slowly away from the berth picking up speed as she moved further out.
With the traditional P&O sailaway the sounds of the Macarena filled the decks and passengers not joining in watched on from her rails.
ORIANA will now spend 2 days at sea before she arrives at Port Everglades for Miami where she will again stay overnight. 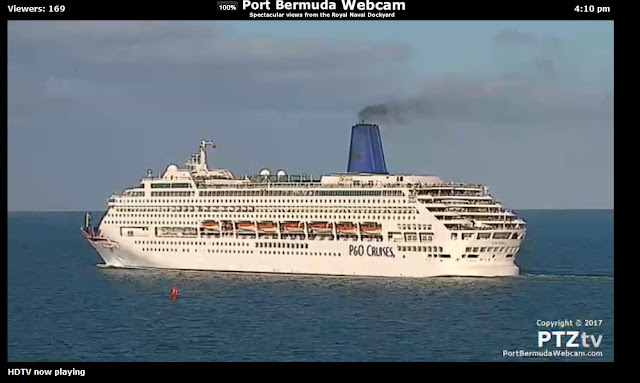 Ahead of ORIANA's call in Bermuda tomorrow we present some image of her previous port of call Praia da Vitória in the Azores where she called on Saturaday ahead of her 5 day transatlantic crossing.
A relative stanger in the Azores ORIANA tends to call during transatlantic crossings such as her current cruise and when calling is often to be seen at Ponta Delgada on the island of São Miguel the largest in the group and it was only due to heavy seas that ORIANA changed ports of call to Praia da Vitória on the north side of the island of  Terceira which is also where the historical capital of the islands Angra do Heroísmo is to be found.
It was only after 20 years in service that ORIANA made her first call at the port when she was given a warm welcome on the 2nd May 2015 mirroring to a degree the her first ever landfall in Funchal, Madeira just over 20 years before.
For passengers who cruise regularly with P&O the call gave them the chance to explore a port they had not visited before.
While this call was not initially planned ORIANA is due to return to Praia da Vitória on 2 more occasions this year firstly on the 22nd March and  then on the 26th May.
Photos Copyright Duarte Lourenço/portopraiavitoria
Publicada por Steve Martin à(s) 17:14 0 comentários

An all round success

Being a little under a week into 2017 ORIANA has started this year with critical acclaim.
Having arrived back from her Christmas/New Year cruise, the first full length cruise since her refit, on the 3rd January after the standard turn around she headed out once again this time for 50 nights to the Caribbean and Amazon river.
Reflecting the high standards of P&O service which have defined ORIANA throughout her career and recent refit the reviews of the cruise shows that after her brief shakedown that entering her 22nd year that cruising on ORIANA is an experience which is as high class as ever.
Covering the entire cruise experience there is little doubt thet cruisers enjoyed their time on board one stating that:  "this was ORIANA's first (proper) cruise post refit and she did look nice; all carpets, curtains and soft furnishings everywhere including cabins, were new and the Conservatory (buffet) had enjoyed a complete overhaul.
And continuing with their opinions of the dining venues on board even countering recent comments on the lack of food being served on board P&O's fleet : "We did think that the food in the Oriental restaurant was excellent with a great choice, promptly served, well presented and hot. I am perplexed by those saying that P&O have cut down on both choice and portion size, as this could not be further from the truth. Extra portions of anything (or even 2 dishes) only had to be requested. The wine waiter was attentive and with a reasonable bottle of wine for around 16 (less any loyalty discount), made wine drinking accessible to all."
With praise also being lavished on the other venues on board
"We tried both Sindhu and the Beach House which were both very good although the atmosphere of the Beach House is of course lost somewhat in winter by not being able to dine on deck. The surcharge of 16 and 7.50 respectively we felt was not unreasonable."
The same reveiwer also had praise for ORIANA's Captain and crew saying,
"The staff really joined in with the festive celebrations and the Captain (David Box) was always visible, often just moving around the ship chatting with anyone and everyone."
While another reviewer had the same view and commented "Captain David Box was everywhere chatting to passengers and catching up with staff."
This being proof positive if any is needed that ORIANA with her unique character and classic cruising charm still has her rightful place in the P&O fleet and many years of service ahead of her .
Following on from that successful cruise ORIANA made an amended first call of her 50 night adventure due to bad weather conditions she arrived at Praia da Vitória in the Azores having to abandon her orignial destination Ponta Delgada.