For 26 year old Oriana Mees there could be no other place on earth that she would want to spend her wedding day than on board her namesake P&O Cruises finest ORIANA, a ship she has known about most of her life as she explained to The Argus newspaper "I knew all my life about the ship because people would say when I told them my name, 'oh, like the ship"
However it wasn't until 2 years ago when she and her partner Tom cruised on board for a romantic break that she would one day share another name with ORIANA, Hamilton Tom's surname, " It was as though it was meant to be " she said
So when Tom proposed to her last year there was only one place she wanted to spend her special day,
Initially wanting to be married on this would not be possible unless the couple were cruising on board due to maritime law not allowing weddings until the ship is at least 12 miles out of territorial waters.
However not to be put off from enjoying her big day on board ORIANA she contacted The Argus paper to see if they could help to arrange something with P&O.
To which they replied  "We were delighted to hear Oriana's story. Our ship of the the same name is a very special one and we will do everything we can to help Oriana celebrate her big day on board."
For more on this story follow this link to the The Argus website.

During the early stages of ORIANA'design and planning when the development was known by the project name Gemini with one of its primary goals being to bring to the new ship the feeling and atomposhere that CANBERRA had developed during her career and also a sense of continuation , updating and expanding many of the features which had become firm favourites while also introducing new ones.
At a very early stage even the proposed name was to add a extra link to the ageing flagship, for a brief time CANBERRA II was considered before being dropped for more appropriate suggestions before ORIANA was revealed as the name of choice during her keel laying in 1993.
As a side note the name CANBERRA II would sometime later make a small reappearance in a very different medium specifically a computer simulation game Ports of Call XXL, one of the Ports of Call seires of games intially released in 1986/7 for the Commodore Amiga seires of computers and later moved to other formats, each based around the running of a shipping company with passenger ships including in the XXL edition "CANBERRA II" the fictional cruise ship which certaily bears a striking resemblence to ORIANA as seen below. 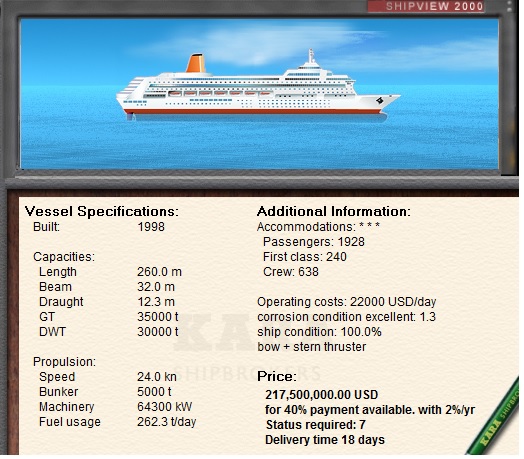 Having departed from Tromsø shortly after midnight local time on the 14th March ORIANA arrived 8 hours later at the most northerly call of her Northern lights cruise the port of Alta located in Finnmark county.
Spending 2 full days in port it's location in the far north of Norway make it the perfect vantage point to spot the often elusive Aurora Borealis itself with the world's first Northern Lights observatory .
As well as looking skyward while in Alta ORIANA's passengers had many different choices of  how to spend their time while docked.
For those with a taste for adventure a thrilling ride by a Husky pulled sledge through the stunning and snow covered landscape followed by a stop at a Lavvu, a traditional Sami shelter or for something different a visit to Alta's Ice hotel or combine the visit with a ride on a snow mobile.
However the true attraction for ORIANA's passengers the anticipation of seeing the Aurora Borealis across the night sky, a dancing veil of light illuminating the frozen darkness.
Having spent two nights docked ORIANA departed Alta shortly before midday local time and is now on route at an average speed of 15 to 16 knots to Stavanger where she will arrive on Friday.
Publicada por Steve Martin à(s) 23:07 0 comentários

Today during her latest cruise to Norway in search of the Aurora Borealis ORIANA called in town of Åndalsnes in the Isfjorden a branch of the Romsdalsfjorden the ninth largest fjord in Norway which is located in the Romsdal district of Møre og Romsdal county. 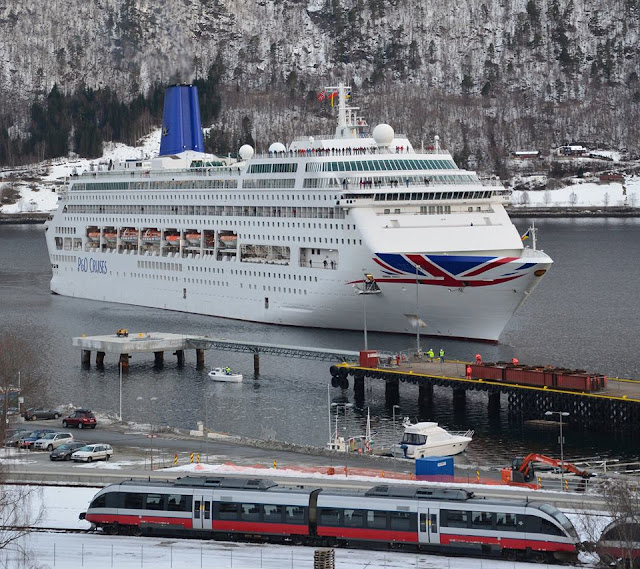 While ORIANA will not be visiting Norway again this year her call marks the first call at Åndalsnes of a P&O ship in 2016 the last will be by her near sister AURORA in September. 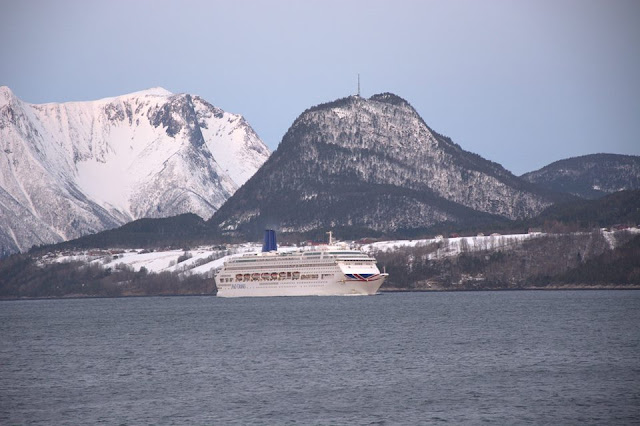 Leaving the Romsdalsfjorden ORIANA is now once again heading north along the Norwegian coast at an avarage of speed of 15 to 17 knots  on route to Tromsø 400 km inside the Arctic circle it is Norway’s most northerly city where she will arrive in early hours of the 13th here ORIANA will overnight before heading to Alta.

ORIANA in the village of Flåm 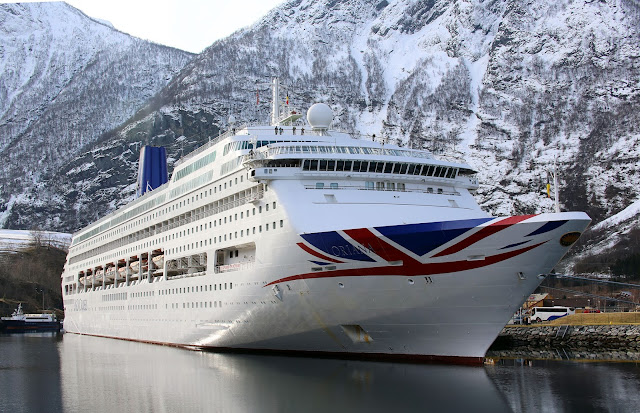 ORIANA seen last week in the port of Flåm, Norway on 5 March, surrounded by a stunning snowy landscape, typical of the Norwegian Winter season. Just like in Stavanger a few days before, she was also the first cruise ship of 2016 in Flåm, although some months ahead of the cruise season in Northern Europe. 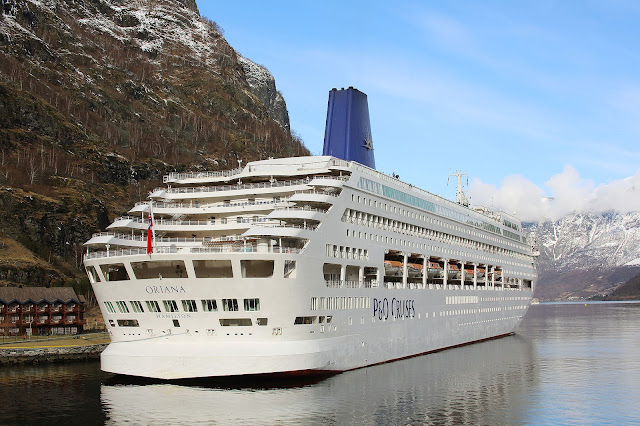 Flåm is a village in Flåmsdalen, located in the municipality of Aurland in the Sogn og Fjordane county (Western Norway). It is part of the Aurlandsfjord, itself a branch of the Sognefjord, the largest and most well known fjord in Norway and the second longest in the World. 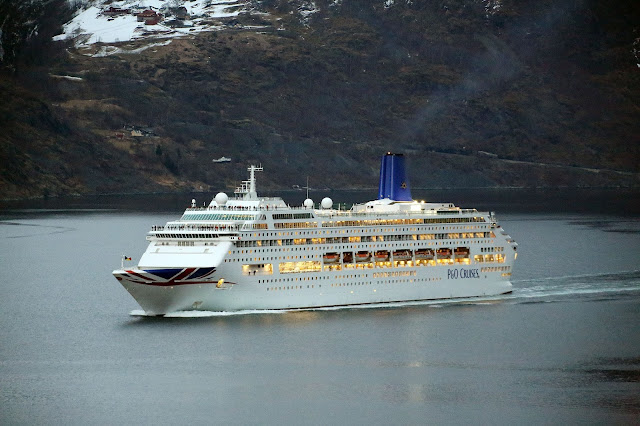 At the moment ORIANA is once again at sea, bound for Northern climes in search of the Northern lights, being scheduled to arrive in the port of Andalsnes on the 11 March.
This has become something of a tradition for ORIANA over the last 3 years, alongside longer transatlantic cruises of 20 to 50 nights.
Photographic Achievement: Tomas Østberg- Jacobsen

The first cruise ship call of the year in Stavanger

ORIANA was the first cruise ship of 2016 to arrive at the Norwegian port of Stavanger, on 27 February, as depicted in this video produced by Harald Oanes.
The "Commodore" of P&O's fleet will return to this port already on 18 March, during the following Norwegian Fjords cruise. Afterwards she will not be back to Norway this year, spending in the other hand her Summer months mainly cruising in the Mediterranean and Western Europe.
Publicada por João Abreu à(s) 08:00 0 comentários