A Look at "PIANO LAND"

For those of us who had the pleasure of sailing on board ORIANA during her successful 24 year career, we can name and recognise her many and vaired venues and stunning features from her Tiffany glass celling topping the Atrium and waterfall (later living wall) backed staircase welcoming her passengers on board in style to listing to piano music in the panoramic Crow's Nest.
Distinctively British in flavour yet still having an international appeal so how has ORIANA been transformed into the 'exclusively  designed for the Chinese Market' PIANO LAND?
Using photos we have been able to find from her new passengers, and local travel agents today we are going to take a look at some areas of the ship to see what has changed and what if anything has remained the same.
We begin our look at the very top of the ship on Deck 13 and one of her many standout features formally The Crow's Nest in it's current form as the Zenith Lounge 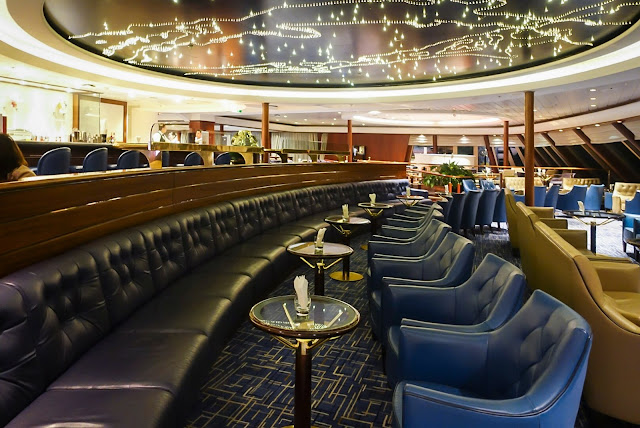 As we begin our tour we can see very little here has been altered featuring the same furnishings and carpets that were in use during her last 3 years of P&O service.
On the port side the former CyberStudy/Crew training room (from 2016)  has become a Multi Function Room gone are desks which once sported computers that passengers could use for internet access instead it takes on the appearance somewhat akin to a meeting room with the majority of the room being taken up with tables and chairs taken from the former Medina Room on the starboard side, arranged faceing each other with other chairs arranged around the outside of the room it also feature a over pull down projector screen on the starboard side and a television screen at the aft end.
On the starboard side the former Medina Room now The Astro Executive Lounge  also has seen very little in the way of changes from the ship's time with P&O like it's counterpart on the port side all artwork in the room was removed by P&O.
Moving down to Deck 12 we come to the the former Oasis Spa & Salon alongside the ship's Gym, now just refered to as Spa and Salon like the rooms above on Deck 13 very little has changed from her time as ORIANA.
Next we come to the Asian Gourment Corner which began life as the Aerobic Disco before becoming the more popular Al Fresco early in ORIANA's career.
Here we find a few minor changes from it's time as Al Fresco, with a newly laid floor and repaneled service counters and surroundings. 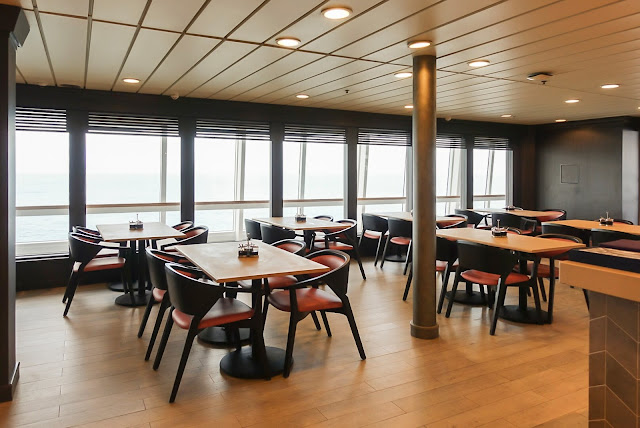 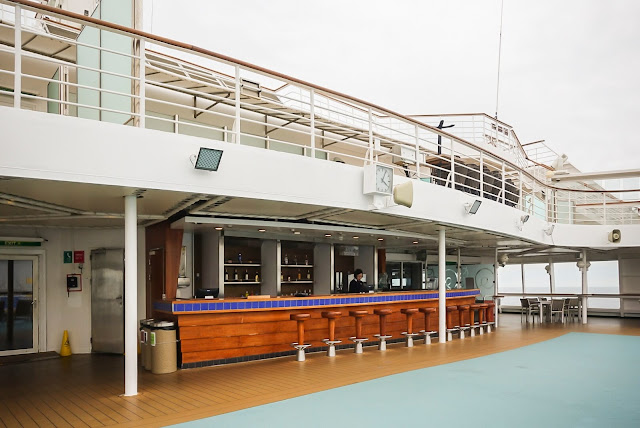 In it's P&O days the bar would serve passengers around the adjoing Riviera Pool and Whirlpool spas
Under Astro Ocean the pool has been covered seemingly becoming a stage of sorts for outside performances while the Whirlpools both remain.
Heading further aft we come to the largest pool onboard still named the Crystal Pool here very little has changed with the pool or the surrounding area still sporting sculputure Floating by Artist / Sculptor André Wallace.
Next we head back inside to The Lido Café buffet formally The Conservatory it at present retains the look it was given during the ship's 2016 refit. 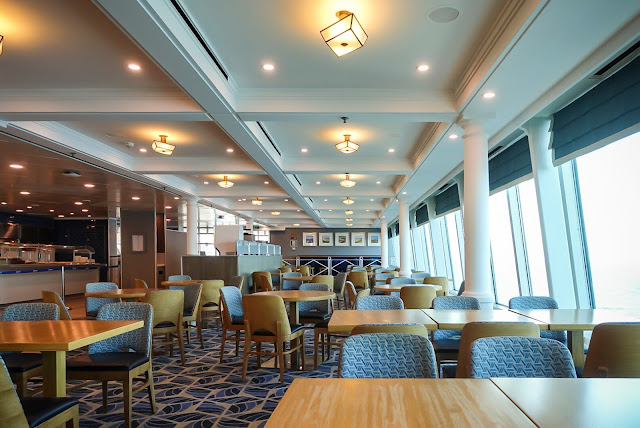 While it is standard practice for a ship changing owners to keep it's overall decor and furnishings even when chaging the market it is operating in most of those ships were designed for the international market to begin with and  require very little in the way of changes to adapt it to a new market, in the case of ORIANA she was designed specifically for the British Market, her decor, layout, room size, varieties were designed to appeal to those senseabilities.
In contrast the Chinese market (or lack of it) is vastly different and to be Custom designed for it as the company and ship managers V.Crew have claimed, the ship would have needed a complete refurbishment throughout something which hasn't happened.
In our next post we continue our look at "PIANO LAND" when we take a tour of her public rooms.