Today we share some photos of ORIANA from her 2016 Christmas and New Years cruise, as is most often the case for ORIANA a cruise around the Atlantic Isles and Iberian Peninsula.
Departing Southampton on the 18th December it was he second cruise and first full length cruise after her refit Nov/Dec 2016 in Hamburg.
The first port of call of the cruise was one of ORIANA's most popular ports and indeed the maiden port of call during her Maiden Voyage over 21 years earlier Funchal, Madeira.
Our first photo from Christmas Eve shows ORIANA alongside in  Las Palmas, Gran Canaria with the Cunarder QUEEN ELIZABETH and Thomson's THOMSON MAJESTY being glimpsed behind.
For the last port of call of 2016 ORIANA again returned to Portuguese waters and another port she has visited many times over the years, as she sailed up the River Tagus to the capital Lisbon. 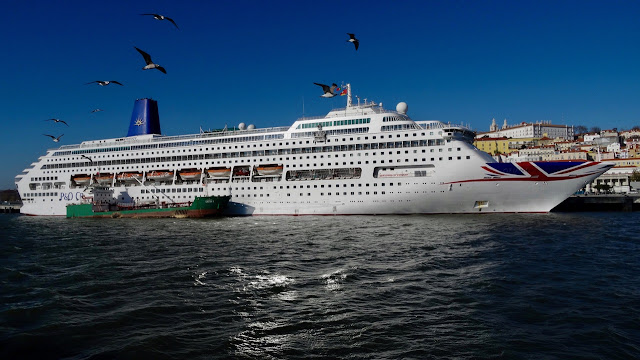 From Lisbon ORIANA headed back to sea to spend New Years eve before arriving in La Coruña, Spain on New Years day.
We would like to extend our thanks Bob Bowler for allowing us to use his excellent photographs.