ORIANA back in the port of Funchal

Yesterday ORIANA was once again in Funchal, capital of Madeira Island, this time for the first port of call of her 16 day Christmas and New Year cruise around the Canary Isles. It was also her first call here after the recent refit in Hamburg, which we have highlighted with several posts in the ORIANA of 1995 blog.
Thus it was already expected to see her with a very fresh look, as good as new, when she arrived early morning after 3 days at sea from her homeport of Southampton.
Her latest call also coincided with the opening of a new photographic exhibition about P&O Cruises, organized by the Madeira Ship Club, in the port's terminal, and her current Captain, David Box, was invited and kindly attended the opening ceremony, showing himself very pleased with the images on display, not only having confessed being a ship photographer as well but remembering some moments of his career onboard previous ships of the fleet such as the VICTORIA and ARTEMIS. 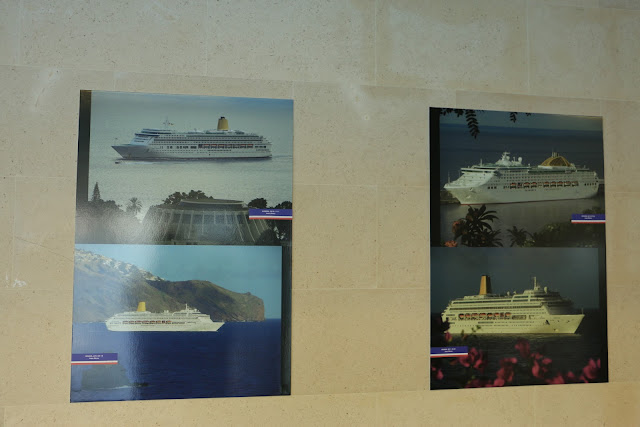 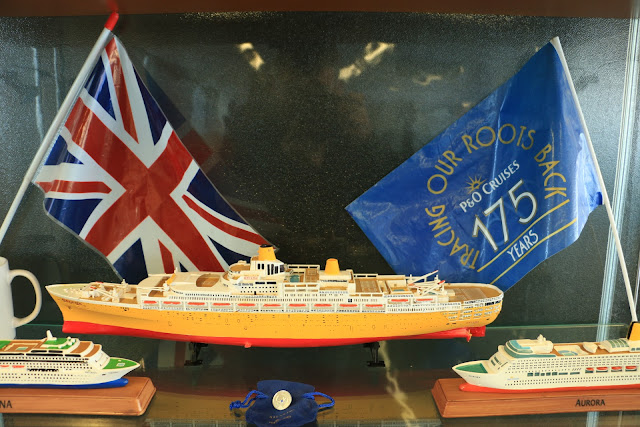 Then he also visited the Club's headquarters, where he was presented with a plaque depicting the P&O meeting between ARCADIA and his current ship, ORIANA, in Funchal last year, and where he also drunk a glass of Madeira Wine and a piece of the traditional honey cake. 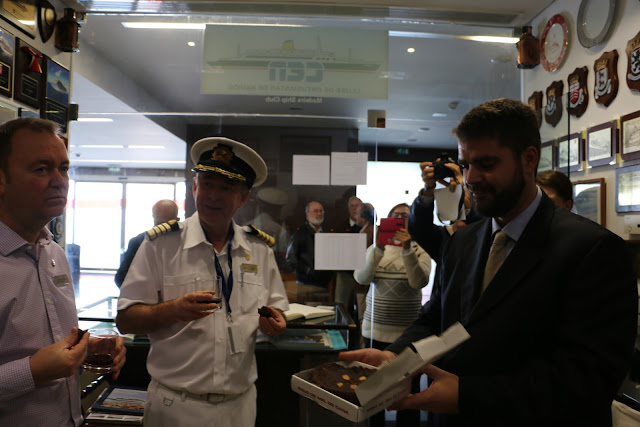 Later in the afternoon, ORIANA departed bound to San Sebastian, in the island of La Gomera, with a significant delay, due to some radar maintenance that was being performed by the crew during the day.
After the Canaries, ORIANA will also call in Agadir, Morocco on the 28th, in Lisbon on 30th and will spend New Year's day in La Coruna, northern Spain, before returning to Southampton on the 3rd January. 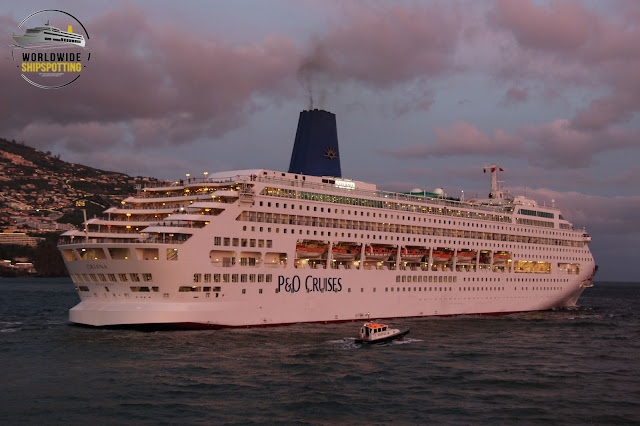 Below we share a video from the website cruisetv.de showing ORIANA leaveing dry dock and heading down the river Elbe 4 days ago
As ORIANA turns ready for her departure she her freshly painted hull made for an impressive sight and with the slight dent to her starboard bow repaired ORIANA again cuts a fine figure of a ship.

Today sees our ORIANA return to service as she departs the Mayflower Cruise Terminal heading out on a 2 night getaway cruise to Belgium ahead of her Atlantic Island Christmas cruise.
As she departs she is following her near sister and fleetmate AURORA in down river.

To celebrate her return to service P&O today released some further images of ORIANA showing some of the changes which have been on board including one which will immediately apparent upon boarding the replacement of the atrium waterfall with what P&O calls a living wall. 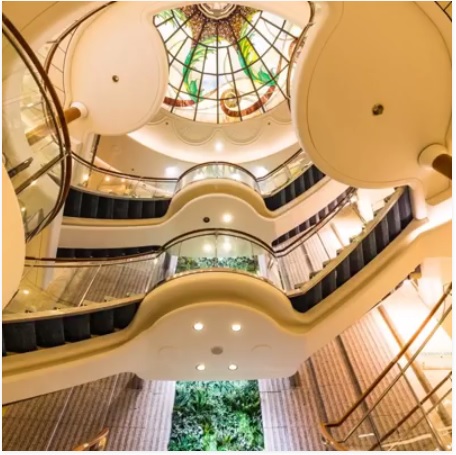 In dry dock with ORIANA

With ORIANA's refit complete and having left dry dock heading back down river we take another brief trip to Germany to have a look at some of the work that took place during the refit.

Alongside the upgrade to cabins/bathrooms and the revitalised public spaces ORIANA has been undergoing the regular dry dock hull inspections which are required every 5 years and cleaning /maintenance including the ship any work required on the hull, rudders, propellors, shafts and seals.
As mentioned earlier in the year during the refit ORIANA's emergency generators have been undergoing a complete overhaul.
From the cruisers perspective the most important changes are to her accommodation and below share some  images from around the ship showing the work in progress. 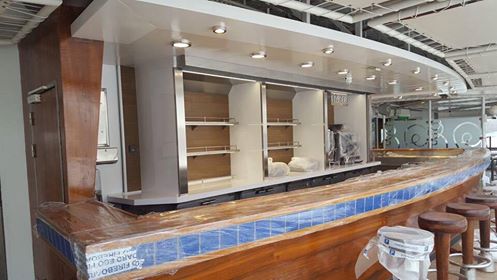 One of the biggest changes on board is to the decor and ambiance of the dining venues including most noteably The Conservatory self service restaurant featuring a new look, redesinged service stations and new furniture. 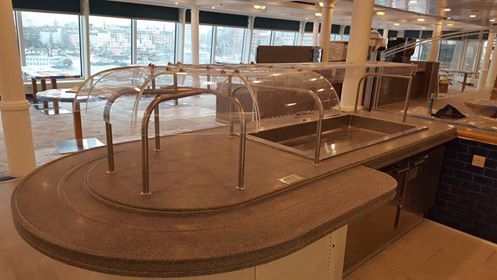 Staying on the Lido Deck we next head forward to take a look at the new look Fitness Centre and Spa.
Featuring renewed flooring the the Gym/fitness area and new look tiling in the spa. 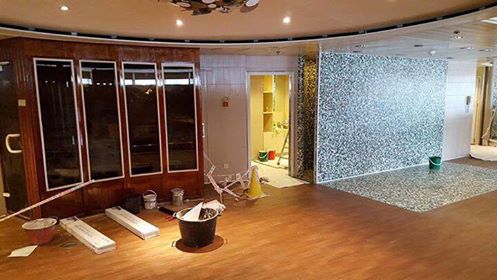 Along with ORIANA her self her lifeboats and tenders have also undergone a complete refurbishment having been lowered from their davits soon after arrival in Hamburg for work by UK based subcontractors Nanotech SST. 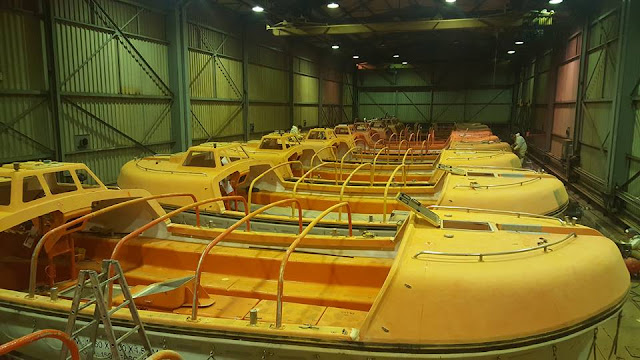 After two weeks of work the tenders and lifeboats are now safely stowed back in their bays above the Promenade deck as all remaing work onboard comes to an end ready for ORIANA's arrival back in Southampton ready for her resume her cruise schedule.
We would like to extend our thanks to Oliver Tall.

ORIANA returns to the New Year's Eve in Funchal in 2018?

According to the website of the port authorities of Funchal, ORIANA is scheduled to make her return to the great gathering of cruise ships in Funchal for New Year's Eve on 2018/19, eight years after her last presence in this festivity.
Nevertheless it will be the first time she will arrive in the evening, due to 10 pm, then overnighting in port and leaving late in the afternoon on 1st January 2019, instead of spending the full New Year's Eve day in Funchal. Her large fleetmate, VENTURA, is also scheduled for that day, arriving early morning and departing after the famous fireworks display.
Altought the occasion being still too far distant, if it is indeed to happen it will be the 11st New Year's Eve that ORIANA spends in Funchal. Her first New Year ever, she welcomed in this port, from 1995 to 1996, and afterwards she returned in 1998, 1999, 2000, 2002, 2004, 2006, 2008, 2009 and 2010, making her the most regular P&O ship in recent history calling during this day, even surpassing her predecessor CANBERRA, with 9 calls made between 1980 and 1996.

Today we take a look to Hamburg's  frozen dry dock 17 and at some of the work going on board ORIANA.
With shipyard workers and contractors working round the clock to ensure ORIANA is back in service for the 16th December the ship bustles with activity while most of the public rooms all passenger cabins and much of the ship's technical systems receive a makeover and upgrade.

On board from stem to stern workers are busy about their assigned tasks from stripping seating from the Theatre Royale laying new carpets in the dining venues.
To complement the new look of ther dining venues ORIANA will feature all new menus inspired by the ports she has visited over the last 21 years.
Elsewhere the public spaces will take on a new look with new designer carpets and soft furnishings. 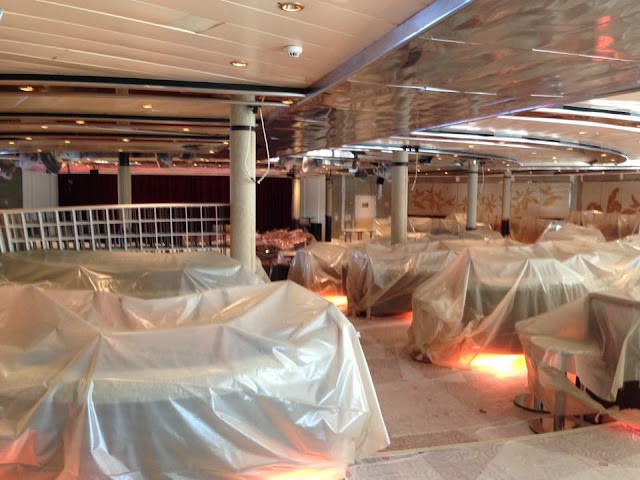 While the work is on a massive scale and is without doubt the largest refit she has had to date P&O have made sure that all the changes preserve the original feel and key features of the spaces and the ship herself so that returning passengers embarking will instantly feel at home when stepping on board.