ORIANA meets her near sister in Gibraltar

On 21st June 2017, ORIANA met with her fleetmate and near sister AURORA in the port of Gibraltar, a home far away from home for most of the passengers onboard.
Appart from being a meeting between two P&O Cruises' mates, just the fact that both these ships were the last projects ordered and built specifically by the company, before making part of the North-American Carnival Corp. in 2003, always adds a more special feeling to the occasion. 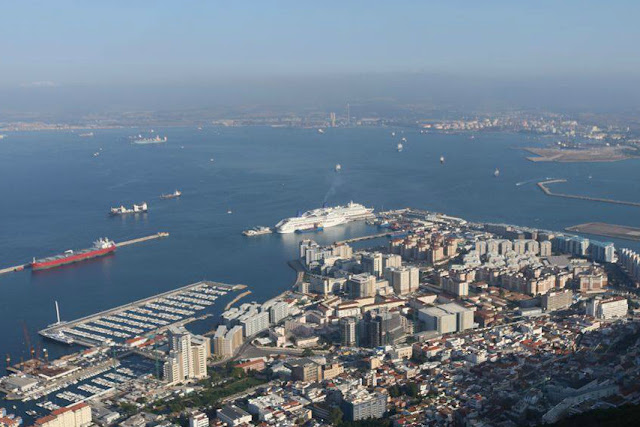 When ORIANA was delivered in 1995, she was the result of a special planning, in order to become a worthy successor of CANBERRA, to whom she carries a lot of resemblances in and out, like the design of the funnel, inspired by the last's twin funnel, the layout of the life boats and tenders in the Promenade Deck, just to name a few.
Five years later, in 2000, AURORA was launched by the same German shipyards that built ORIANA, Meyer Werft in Papenburg, and therefore was seen as a modern version of her older mate.
Having a bridge with enclosed wings and a retractable dome in the Crystal Pool, which became sort of a fashion in the late 90's/early 2000's, are just some of the differences between the near sisters.
Despite that, AURORA retains many similarities, when it comes to layout and features, as ORIANA, thus the reason that both are considered to be a living legacy of the venerable and much beloved CANBERRA. 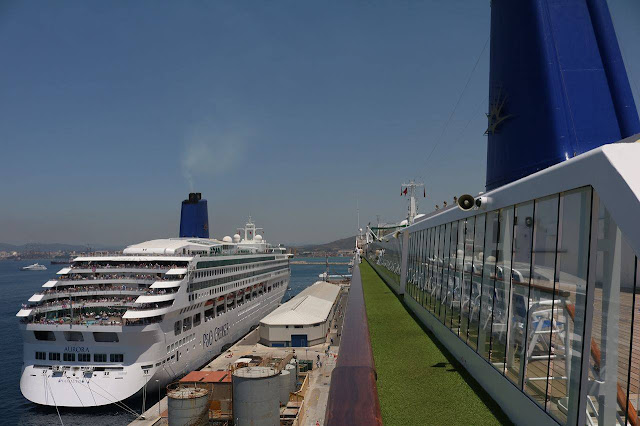 For this meeting ORIANA arrived from the Greek island of Corfu, while on a 19-night Med cruise based in Southampton, and AURORA did so from Sardinia island in Italy, as well undertaking a Med itinerary of 16 nights, also from/to her British homeport.
Afterwards the two went on their own different paths as ORIANA departed homeward bound, and AURORA made her way for a small voyage en route to Lisbon.

ORIANA and the environment

Early last week 1.7 million UK viewers tuned in to see inept reporter Tazeen Ahmad go undercover and board P&O's OCEANA armed with an air quality monitor, an infered camera and with  a shoreside group of 'experts' to reveal the 'true' cost of our cruises to the enviorment.
While her methods were for the whole best described as pseudoscience and her results along with  other sources were highly quetionable, it did not stop her or the programme declaring that one cruise ship in a day produces the equivalent pollution of 1 million cars.
So with that in mind today we look at how ORIANA who has been in service 5 years longer than OCEANA measures up in terms of environmental performance
Like all cruise ships in service today ORIANA uses heavy fuel oil to power her 8 medium speed diesel engines which have a combined output a total of 78,100 hp or 57,430 kw
These engines 4 main and 4 auxiliaries were designed from the outset to be as efficient as possible this included having the fuel heated to a certain temperature before being pumped into the engine for combustion.
The 'farther and son' arrangement of the engines is also to the trained engineers a flexible system which enables different configurations to be used which allow she ship to burn as little fuel as possible and ensure that maximum efficiency is achieved.
In combination with the engines ORIANA has two other different systems which help with reducing the possible emissions the ship produces, firstly her propellers being controllable-pitch, also known as varible-pitch means that their effiancy can be increased by altering the pitch of the each propeller's blades increasing their effectiveness in the water allowing an increase in speed without increasing fuel consumption.
Under normal circumstances even with efficent engines when combustion takes place in the engine only two thirds of the fuel is used the other third would be released as waste heat and gas this is where ORIANA's other system comes into play alongside her powerplant the ship features a heat reclaim boiler plant, consisting of 2 vertical down-fired boilers, 2 water-tube exhaust-gas boilers and 2 twin water-tube exhaust-gas boilers this set up allows the waste gases to be utilised elsewhere on board for heating water etc.
The remainig CO2 (Carbon Dioxide) which is emitted from the funnel is filtered through a series of particulate filters to clear the majority of particles from the exhaust before being finally released from the funnel.

Another area mentioned in the programme was cruise ships discharging waste water in open seas.
According to the programme's sources  a typical cruise ship discharges around 799,000 litres of waste water per day which they dump, if their expert is believed, without any form of treatment.
On cruise ships there are two different types of waste water Black water from the ships sewage system and Grey water from sinks, the galley and other areas.
On board ORIANA as with most cruise ships in service today the water is treated on board and can either be reused on board in the ship's ballest tanks or can be once it has been fully treated returned to the sea in partically the same condition it was first pumped on board.
In order to treat the high amount of waste water ORIANA's water treatment system consists of no less than 4 Hamworthy Super Trident sewage treatment plants designed and built by  Hamworthy Engineering ltd of Poole, Dorset a world leader in the industy and now part of Wärtsilä.
Once all solids have been removed from the waste water it is pumped through the treatment plant where natural additives are added to further break down waste products remaining in the water.
Depending on the ship's location and the status of the water being treated ORIANA will either transfer water from her tanks once she reaches port for waste handlers to treat further or will while at sea discharge water back into the sea which has completed treatment and is free from all waste products and contaminants.