Today we take a look back at to April 1995 and a look at special edition of the Daily Echo, the local Newspaper for the Southampton area, published to celebrate ORIANA's arrival and entry into service.
Proudly displaying ORIANA on arrival in Southampton  and the caption Cruising into the 21st Century 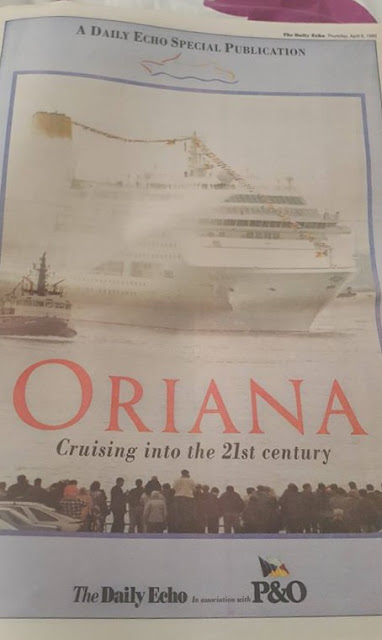 Inside the pages publicised many of ORIANA's features from her luxurious interiors to her crew and heritage recalling and comparing her to her 1960 built namesake.
Rounding off the publication with a optimistic outlook for ORIANA that 'From Today other Holidays will be Left In Her Wake'  in everyway reflected the companies hopes for her and the reality which was to follow.

ORIANA through the years - Maiden Departure and First Port of Call

The dawn of Sunday  9th of April 1995 brought ORIANA her first day at work, for the passengers who  would be arriving at the Mayflower Cruise Termianl her pristine white hull and her CANBERRA inspired buff funnel made for an impressive sight for the 1,800 passengers joing her for Maiden Voyage
It had been 3 days since her high profile naming by Her Majesty The Queen and the associated festivites of that day and now ORIANA was meeting her paying  public for the first time.
Boarding the new pristine flagship was an experience like no other for her passengers, never before had a ship like her been built, custom designed ship for the UK market a departure from the former ocean liners such as CANBERRA, and also difffering to the mass market glitzy shopping mall like ships entering service for the US market ORIANA in every respect was one of a kind, no multipurpose Las Vegas show lounge instead a dedicated West end theatre and a wider choice of bars and public rooms than any other ship then in service at that time.
As her passengers boarded the first on board entertainment began with relaxed piano music in The Crow's Nest to accompy the lofty views of Southampton while elsewhere on board other acts performed in Harlequins the on board night club/dance floor and The Pacific Lounge.
With safety drills held at 5pm ORIANA was finally ready to sail and just 6pm passengers lined her rails streamers rained down from her promenade deck as the  The Band of the Royal Corps of Signals began to play as under Commodore Gibb's and the pilots guidance ORIANA slipped her moorings and headed down Southampton Water
And for those not able to be onboard P&O published a map showing the approximate times she would would be passing certain points of her route. 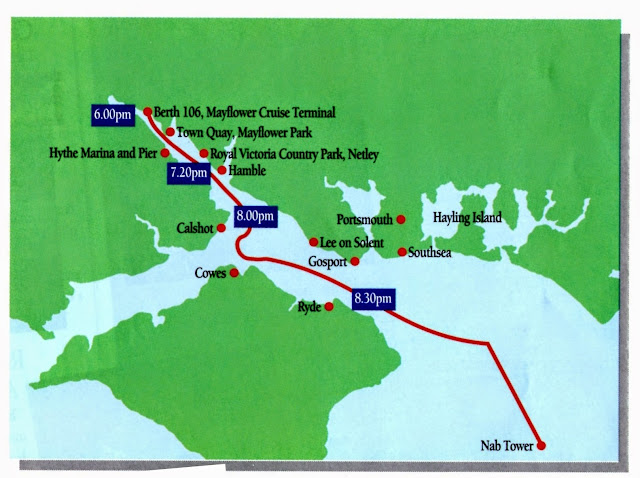 As ORIANA left Southampon behind her passengers settled in to their brand new home.
ORIANA's first call on this Maiden Voyage was none other than Funchal, Madeira a port that P&O had been calling at since it's early days and as liner passengers had given way to cruise passengers it had become one P&O's most popular port of calls among both passengers and crew.
Arriving on the 12th April ORIANA's reception at Funchal was as warm as her departure 3 days earlier with a flotila of small craft welcoming the new arrival and escorting her to her berth. 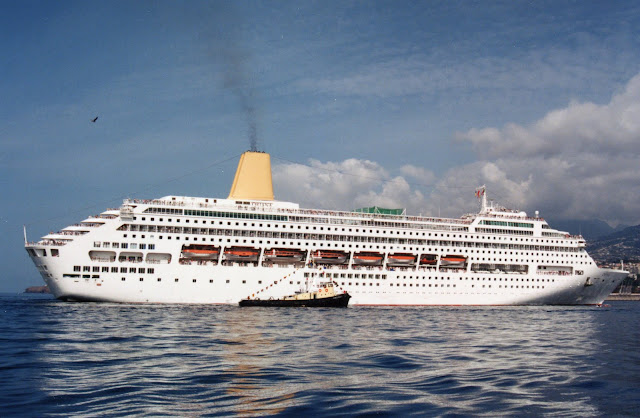 As ORIANA herself was welcomed her passengers were made as equally welcome being given local flowers as they disembarked. 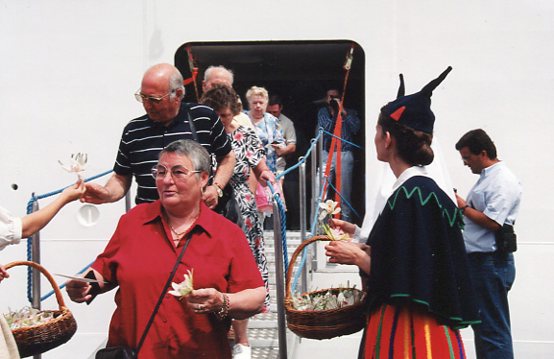 Being an overnight call a local folkloric group went on board during the evening to give a typical local performance for ORIANA's passengers while the ship herself was saluted with a fireworks display in her honour.
In something of a time honoured tradition visitors of the local ship enthusiasts club (CEN) were welcomed on board and shown around by members of the crew.
Having had a warm welcome and stay overnight on the 13th April ORIANA's departure was as celebratory as her arrival had been with many Madeirans lining the port area the sea wall and the seafront of Funchal to see her sail.
One image taken from that day is still in use on the island to this day on various postcards. 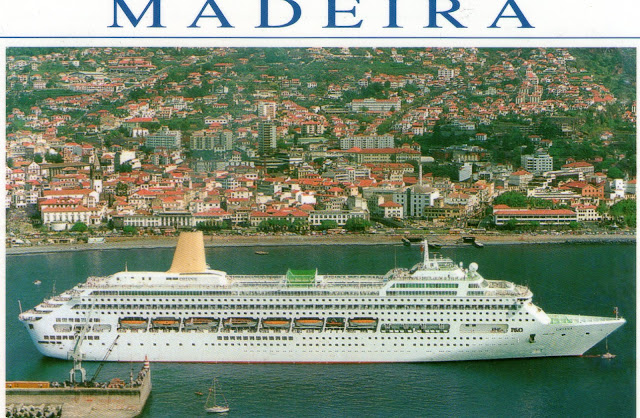